Alan Wilson: The Bridge between Woodstock and the Delta Blues

The Museum at Bethel Woods Fall Oral History Intern Will Kleffner reflects on the connection between blues music and Woodstock.

Before Alan Wilson became a founding member of the Canned Heat, a blues and rock group based in Los Angeles, California, he was a young jazz and blues enthusiast. An Arlington, Massachusetts native, Wilson was born on July 4, 1943. Growing up in the 1950s, he was infatuated with jazz music, associating jazz with the emerging Beatnik culture. After a close friend played a Muddy Waters record for him, he became invested in blues, often writing blues music articles for the Broadside of Boston newspaper and Little Sandy Review. Wilson’s passion for blues music extended beyond academia: by the early 1960s Wilson became a well-established member of the Cambridge, Massachusetts folk music scene. He possessed a strong musical prowess often influenced by Delta Blues artists like Booker T. Washington “Bukka” White, Nehemiah “Skip” James, and his biggest influence, the “Father of the Delta Blues,” Eddie James “Son” House, Jr. 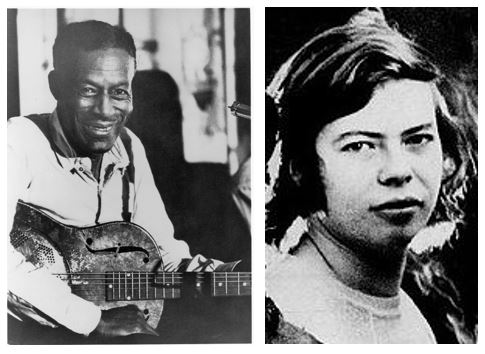 Son House first recorded for Paramount Records in 1930. In 1941 and 1942 he recorded for the Library of Congress with ethnomusicologist Alan Lomax1.  Lomax was the Assistant in Charge of the Archive of Folk Song from 1937 to 1942, where he obtained thousands of field recordings of folk and jazz musicians. These recordings of House would play an important role in Alan Wilson’s knowledge of the musician. By the 1960s, Wilson was under the impression that House had long since passed away, but following a conversation with Bukka White in April of 1964, he was proven wrong. White suggested that House might be living in Memphis, Tennessee2.  Eager to validate this unsubstantial tip, Wilson’s close friends and fellow blues fanatics Phil Spiro, Dick Waterman, and Nick Perls traveled to Memphis in search of the musician. Failing there, the men then traveled to Mississippi where they tracked down one of House’s performing partners, “Fiddlin’” Joe Martin. He put them in touch with Benjamin Brown, Sr., who had been married to House’s stepdaughter. Brown provided contact information for one of House’s distant relatives in Detroit. This relative confirmed that House was living in Rochester, NY.

When the three young men found House in Rochester, they learned that following a religious conversion in the 1940s he had not played guitar in over 20 years and had instead been working a variety of odd jobs3. At sixty-two years old in 1964, House had completely given up on performing and was unaware of the resurging popularity of his music.

Years of hard labor and alcoholism had wreaked havoc on his body, and House had little to no recollection of how to play his own songs. His fiery, passionate style of performing from three decades prior appeared to be a distant memory. To help House recall his music, Spiro, Waterman, and Perls enlisted the help of an expert in House’s music: Alan Wilson. By 1964, Wilson had become an expert in the bottleneck style of guitar and harmonica. He sat with Son House for two hours a day, teaching him how to play like, well, Son House.4

As he regained his abilities, encouraged by Wilson, House began recording his former tunes. He played several festivals in 1965, including the influential Newport Folk Festival5.  His first album following his rediscovery came in October, 1965 with the “Father of Folk Blues,” recorded by John Hammond of Columbia Records. In addition to House, this album featured a twenty-one-year-old Wilson on “Levee Camp Moan” and “Empire State Express.”

Deep into his collaboration with Son House, Wilson and his Canned Heat bandmates performed at Woodstock. Though their set was not directly influenced by this work, there is no doubt that it was the result of inspiration from House and other old blues artists. Two of the songs on the Woodstock set list, "Going Up the Country" and "On the Road Again," are remakes of old blues tunes by artists Henry Thomas, Floyd Jones, and Tommy Johnson. “Going Up the Country” is a remake of "Bull Doze Blues," originally written by and recorded by Thomas in 1927. As the lead singer on that song, Wilson sings in a high tenor, a vocal style that he imitated after listening to another Delta bluesman, Skip James. "On the Road Again" was originally recorded by Tommy Johnson as "Big Road Blues" in 1928. Canned Heat covered and recorded it in 1967.

After Woodstock, Alan Wilson and Son House recorded together again in 1970, on the album John the Revelator: 1970 London Sessions. Wilson’s harmonica playing is featured on the song “Between Midnight and Day.” This album would be the final memory of this legendary partnership, as Wilson would pass away at the age of 27 in September of 1970, shortly after its release. Son House continued to work until 1974 when ill health forced him to retire. He died in 1988.